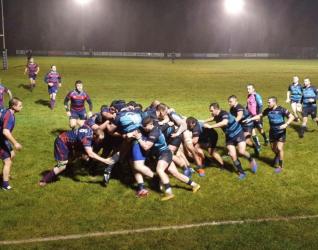 Castlerbar made up for their 24-14 defeat against Tuam in the previous league game with an impressive win for the home side in very wet conditions.

A try from David Staunton off the back of a scrum in the first half and Sean Tonra from a maul in the second sums up the tough nature of the game which required keeping the ball tight, limiting mistakes and execute when in the oppositions 22.

2 penalty kicks and 1 conversion meant another solid kicking game from Barry Walsh! Man of the Match was Gareth Dunne who put in quite the defensive shift on top of some attractive attacking play. Castlebar as a full 15 dug deep for the win with everyone putting in a shift for the 80 minutes. This sees Castlebar in 5th place in the league with Monivea at home next where they will be hoping to add a 3rd win of the season against the Galway side.