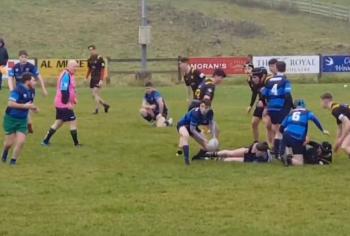 Castlebar U 17's got back to winning ways at Cloondeash on Sunday with a well organised display against rivals Carrick in this round of the Connacht league.
After slipping up against Corrib last time out the Castlebar outfit were determined that there would be no slip-ups this time round. Carrick kicked off under cold and overcast conditions and immediately Castlebar were in attacking mode.
From the off the Castlebar Youngblood’s heaped huge pressure on the Carrick defence with big carries in the midfield from Centres Oran Cresham and Seamus Hayes leading to a series of penalties for Castlebar. When the ref pinged the Carrick centre for not releasing after a tackle by No. 6 Darragh Fahey, Outhalf Brian O Flaherty made no mistake from the tee to put his side 3-0 up.

Their first try of the afternoon followed soon after with the ‘Bar moving the ball wide. Good work from new boy Conn Mc Namara made ground out on the wing. Flanker Conor O’ Neill made huge metres with a big surge shaking off a number of tacklers after the ball was moved inside. Quick ruck ball and quicker hands found the ‘Bar in the Carrick 22. . A big drive from prop Cathal O Boyle saw him barrel his way over only for the ref to deem it held-up.
From the resultant 5 metre scrum there was no stopping Big Donnie Mc Hale from crashing over to score. O’ Flaherty added the extras with the conversion to make it 10-0 midway through the first half.
Fahey steals a lineout from a Carrick penalty and sets up the next Castlebar attack. He flicks down to scrum-half Devlin Gormally who finds O ‘Flaherty and the No. 10 shrugs off tackle after tackle eventually being brought to ground. Le Bras is next to carry and makes good yards. The ball is recycled quickly with carries by O ‘Neill and lock Mark Flannery. The latter finds full-back Aaron Moran’ who’s carry up the tram-track finds them close to the Carrick 5 metre line.
No.8 Liam Hegarty makes good ground through heavy traffic and sucks the Carrick defence in. Gormally is quick to recycle and finds O ‘Flaherty with numbers outside. He chooses to go himself and scores to put Castlebar 15-0.
Carrick were trying to find their rhythm but full credit to the ‘Bar lads who repelled the attacks. Dominant tackles by Flannery and Hegarty kept the visitors at bay and kept them scoreless. A number of tackles by winger Bob Tuohy was instrumental in keeping his side’s clean sheet.

Indeed Castlebar were guilty of butchering a couple of chances before the half-time whistle with huge overlaps outside on a number of occasions, with the line at their mercy. There are still valuable lessons to be learned at this age, but at least they’re on the right path.
Coaches Gerry Casey and Paddy Durcan introduced the reserves after half time. New boys Finn Kellet and Jack Walsh gave a good account of themselves. Matthew Goodwin was outstanding on the wing with a series of carries one of which led to the home side’s final try.
Big Donnie carries into contact and the ball is recycled, Goodwin receives and makes huge yards up the middle of the park. Oran Cresham is next to lead the way with a powerful charge into the Carrick 22. Walsh to Le bras and the ruck is set. Carries by O Boyle and Murnane finds them just short of the Carrick 5. Hayes continues the move with good footwork. The ball is moved quickly through the hands finding Kellet who passes to Tuohy. Next to show is the fleet-footed Moran, who with help from Shalom Azenabor finds the onrushing Hegarty, who can’t be stopped from scoring a spectacular team try.