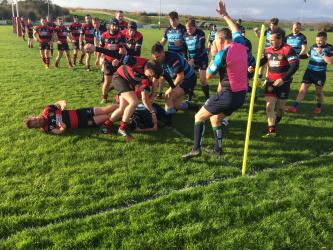 With the pitch being marked out at the crack of dawn on Sunday morning by the Director of Facilities, Mr. Jim Moore, the perfect scene was set for the sunny afternoon meeting of J1A table toppers Monivea visit to Castlebar in what was forecasted by many to be a competitive and tight affair. A large home crowd descended on Cloondeash and it was the home team who started the game with the momentum after Monivea were penalised for being off their feet. Fly-half Daniel Plaster expertly kicked the ball inside the Monivea 22. The visitors were penalised again for a neck roll offence and gave Castlebar their first scoring opportunity. The penalty was taken by Damien Togher but unfortunately it went to the right of the posts, letting Monivea off the hook after 5 minutes of play. From the restart, Monivea elected to play a fast moving, wide passing game and made a lot of ground in attack. Having lost the ball for a forward pass on the half way line Castlebar mounted a counter attack but the ball was turned over again and Monivea advanced inside the Castlebar 22-yard line. Using their backline effectively, the ball fell to their full back, Seamus Fahy who passed it out to their winger Kevin Divilly who got over to claim the credit for the first try of the game, touching down in the corner. The conversion was missed leaving the visitors with a 5-0 advantage after 10 minutes of play.

Castlebar needed to respond quickly and that they did with some excellent kicking from Danny Plaster who was returning from injury and was later named Man of the Match. Both forwards and backs played extremely well with Liam Molloy and Conor Carter making some great runs gaining valuable ground for Castlebar. The ball was recycled through a number of phases and it fell to Gavin Sullivan, being supported by the hardworking props of Fintan Murphy and Ruairi Hughes to get across the try line to level the score. Again, the conversion went astray to leave the score all square at 5 - 5. Both teams dug deep and gave the crowd an entertaining game with some heavy hits and ground being gained through multiple rucks and scrummaging. On the half hour mark, Castlebar progressed inside the Monivea half and recycled the ball a number of times before it was powered over the Monivea line by Matthew Staunton bringing the score to 10- 5. With the first half coming to a close Castlebar made two changes bringing on Padraig Conneely and Frank Walsh replacing Daire Mulgrew and Gavin Sullivan in the pack.

The second half got underway with Castlebar being penalised for being offside and Monivea took full advantage with Gerard O Connor kicking the penalty to bring the score to 10 - 8. With some heavy hits being dished out by both sides Castlebar lost their hooker Sean Tonra who was having a great game through an injury. Darragh King came on to fill the hooker position and Sam Hastings came on in place of winger Jason High. After 10 minutes of play Castlebar went on the attack with the ever-reliable, Luke Staunton making good progress before passing the ball out to his brother, Mark who in turn passed the ball out to winger Conor Carter. Conor looked likely to score, sprinting down the wing but was unlucky as he was put into touch by the Monivea defenders. Monivea survived the attack and launched a counter attack which saw them encounter a solid defensive wall by Castlebar. Castlebar reshuffled their back line taking Conor Carter off and putting Fintan Casey on the wing and moving Sam Hastings from the wing into the center alongside Mark Staunton.

Despite both teams having opportunities, the score remained fixed for the first 30 minutes of the second half. Monivea were then penalised inside their own half for a neck roll tackle. Damien Togher took advantage of the penalty extending Castlebar's lead to 13-8. Castlebar brought back on the influential second row player Daire Mulgrew and also brought back the agile footed, Conor Carter. With approximately 7 minutes left in the game, Castlebar found themselves in a scrum deep into Monivea's half and Davey Staunton quickly released the ball to Damien Togher who tried to go down the narrow side but was blocked by the Monivea defence. The ball was recycled a number of times before being passed out wide by Damien Togher through the hands of the Castlebar attacking line before finding its way out to the unstoppable winger Jack Rowland to touch down for a well-executed try bringing Castlebar's advantage to 18-8. This was no doubt the play of the game involving the majority of the team and decided the outcome of the game. However, the drama was not over as Monivea raised their game a number of gears and went in search of a losing bonus point. They finished the stronger team as they recycled the ball up the pitch and were rewarded with a try to bring the final score to 18-13. Castlebar secured 4 valuable points from the game to bring their total in the J1A league to 16, one behind Monivea who gained a single losing bonus point. Connemara meanwhile move to the top of the J1A league table with a total of 20 points after securing a bonus point win over Sligo. Next week is a free weekend for the senior XV team with the next scheduled game away to Buccaneers at 7.30 pm on Friday 16th November.

Castlebar Rugby Club would like to take this opportunity to extend our best wishes to our prop Fintan Murphy who played a decisive role in the game and has been an integral part of the team this year as he leaves us to pursue a new opportunity in the US. Go n-eirí an t-ádh leat, Fionntan.