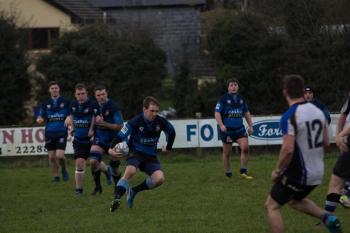 Castlebar welcomed Corrib in the semi-final of the Curly Cup on Friday night. Castlebar are currently on top of the J1B league and looking strong, as they are on a strong winning streak at the moment, while Corrib are currently of top of J1C league and were looking to put it up to the Castlebar boys.

Played in excellent conditions for a free flowing game, the crowd in attendance were treated to some excellent rugby. Corrib grabbed the first score of the game, thanks to the boot of their scrum half who slotted a penalty to give his side a 3-0 lead. It didn’t take the hosts long to respond, as they grabbed a try immediately, thanks to winger Damien Togher who finished off some impressive play. Ronan Conway converted the try to make it 7-3.

It was the away side who scored next, thanks to another penalty that reduced their deficit to a single point.

Castlebar were desperate to grab a score before half time to extend their lead and they were able to do just that. After a strong maul, hooker Sean Tonra was able to break off and barge his way over the line for the try. Conway converted the try to increase the hosts lead to 14-6 at the break.

Corrib started off the stronger of the sides in the second half, as they grabbed another penalty to reduce their deficit to 14-9, but just like the first half they conceded quickly after. Following, a strong run from Tommie Keane he was able to off load the ball to scrum half Conor Tuohy who ran under the posts for the try. Conway converted the try to make it 21-9 to the home side.

The crowd in attendance were treated to a score fest in the second half, as both teams got on the score line again in the space of a few minutes. Corrib got the first score thanks to their flanker, who got on the end of a smart kick to pick up the ball and go over the line. The try went unconverted. However, yet again the hosts responded without delay thanks to Ronan Conway, who broke through the defence and ran into the corner for the try, which went unconverted to make it 26-14.

Castlebar looked to seal the game off and were able to do so thanks to Tommie Keane who broke down the pitch to run under the posts for the try which was converted by Conway, to make it 33-14.

Corrib were in search for a consolation score and were able to grab it in the last play of the game, thanks to their second row who was able to pick the ball and drive over the line for the try. The conversion was scored and the game ended 33-21 in favour of the home side.

This was the last game of 2016 for Castlebar and they will be hoping to carry their current form into 2017 with them.