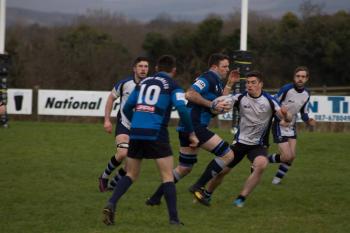 Castlebar travelled to Ballinrobe on Sunday in the Connacht J1B League. Castlebar were searching for their fourth win in a row, while Ballinrobe were looking to bounce back following a disappointing defeat against Sligo.

Played on an excellent surface for a free flowing game the crowd in attendance were treated to a high scoring affair. Castlebar started off the strongest of the two sides, as they piled the pressure on the Ballinrobe defence, the hosts were able to keep calm and force the knock on to keep the away side at bay.

Ballinrobe got the first two scores of the day thanks to the boot of Steven Conroy, who gave the home side a 6-0 lead. The lead didn’t last long as Castlebar bounced back with two tries in quick succession. The first coming from Luke Staunton, who broke through the middle of the defence to run under the posts for the try. The second one was scored by winger Damien Togher after some impressive back play. One of the two tries where converted to make it 12-6 to the away side.

The hosts were desperate to grab a score before the break to try and reduce their deficit. In a dominating spell they were able to grab three quick fire scores to take the lead before the break. Starting off with a penalty from Conroy, which was followed by two impressive tries from their forwards. The first thanks to second row Anthony Coleman who picked the ball up and drove his way over the line, while the second was scored by flanker John Mannion, who was on the end of some impressive interplay by the home side. Conroy converted on both occasions to make it 23-12 to Ballinrobe at half-time.

The opening exchanges of the second half where very nip and tuck as neither team could gather any momentum. The first score of the half didn’t come until the last 20 minutes when Castlebar reduced their deficit, thanks to a great try by David Staunton who capped off a dominating period for the away side. Ronan Conway was unable to convert to leave Castlebar six points adrift.

Castlebar were desperate to grab a score before the end in hopes to steal a win and they were finally able to get over the line, thanks to Mark Staunton who stepped through the hosts defence to barge his way over the line. Rogan converted the try to give his side a one point lead at 24-23.

Castlebar were in for a nervy final few minutes but were able to keep the hosts at bay to close out the game and win 24-23. Coach Seamus King was delighted with his side’s never say die attitude.

Castlebar will now welcome Corrib in the Curly Cup Semi-final next Friday night, were the town boys will be hoping to hunt for some silverware.