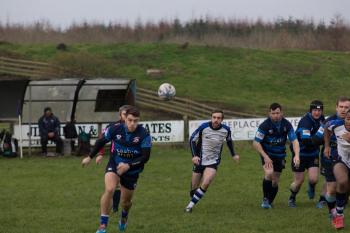 Castlebar welcomed Corinthians on Sunday in the Connacht J1B league. Castlebar were coming off a fine run of form as they have won two games on the trot, while Corinthians were looking to bounce back after a disappointing loss to Tuam.

Played in excellent conditions for an expansive game, the supporters in attendance were treated to an exciting game of rugby. The hosts started off the stronger of the two sides as they piled the pressure on Corinthians. Pressure finally turned into points for the home side, as they won a penalty and went 3-0 up thanks to the boot of Ronan Conway.

The away side looked in shock from the constant pressure by Castlebar, as they couldn’t find their feet at all inside the first 20 minutes. Just as the home side looked to be in control of the game, Corinthians scored two quick fire tries against the run of play. The first came from a clever kick by Greg Faherty, which was put in behind the Castlebar defence for flying centre Conor O’Donovan to run onto and touch down for the try. The second came from an impressive individual run by winger Brian Dixon, who received the ball after some slick hands to race to the line for the try. Pat Long added the extras on both occasions to make it 14-3

Castlebar were desperate to reduce the deficit before half-time, but found it very difficult to break down the away side’s defence. They were finally able to add to their tally on two occasions before the break. The first through an intercept by Luke Staunton, while the second was also an intercept which was scored by Ronan Conway. Rogan and Conway added the extras to make it 17-14 at the break to the hosts.

The second half played out the same way as the first as both teams continued their attacking play. Both teams grabbed two impressive tries. Castlebar grabbed the first, after a strong maul second row Padraig Conneely, broke off the maul to force his way over the line. Conway converted to extend the hosts lead to 24-14. Corinthians fought back immediately and grabbed a try thanks to Conor O’Donovan who grabbed his second of the day. Long converted to make it 24-21.

The last 10 minutes of the game where very nail biting as both teams fought back and forth with scores. The home side looked to have sealed the game with a penalty from Conway to extend their lead to 6. However, the away side were not giving up without a fight, as they grabbed a try in the last play of the game through long, who broke through the defence to go over in the corner to reduce the game to 1 point. Long needed to convert the try to win the game for his side, but he narrowly missed the kick to finish the game 27-26 in favour of Castlebar.

Castlebar will now travel to Ballinrobe next week were they will be hoping to continue their winning streak.