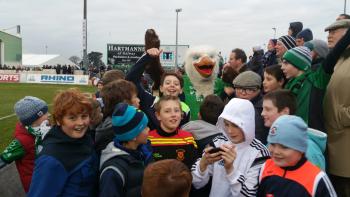 Castlebar Under 13s played Buccs in Galway on Saturday last prior to watching Connacht play Treviso in the PRO12 competition.

The Buccs side were much larger, and it was obvious from the start that Castlebar were going to have to tackle well to stay in the match. Buccs put together a few drives, and got an early try before Castlebar found their rhythm. They kept the tackles low, and brought down the much larger Buccaneers players. When Castlebar did get some ball, they moved it away from the contact area, and out to the wide-out runners where John McMonagle, and Brendan Gaughan were very effective. Jack Jordan was outstanding at full back, catching everything and always dependable as the last line of defence. Some of the smallest Castlebar players were the best tacklers - Patrick Flannelly, Cathal Fahey and Oisin Moran stood out as the best. Rory Gallagher as usual got through an immense amount of work in the rucks, and Devlin Gormally and Alasdair Hill used the possession very well. Hayden Murphy, Karl Jackson, Stephen Moran, Joe O Donnell and Donnacha Flynn worked hard in the pack. Paddy Wright found open space several times, and Patrick Carney and Cian Togher played well when they came on.

Buccs changed their tactics at half time and started using their big ball carriers. This was very difficult to contain and their power game got them over the line twice. But this Castlebar team never gave up, and it is very telling that the last score of the game was a touchdown by Donovan McHale after some great work by Donnacha Flynn, Rory Gallagher and Devlin Gormally.

The team then had a great time watching Connacht beating Treviso in the Sportsground.

Training is every Wednesday at 19.00 and new players are always welcome.