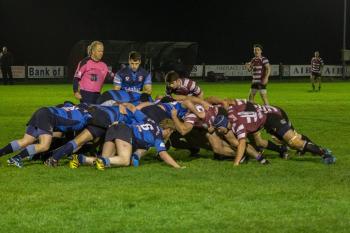 Castlebar travelled to Loughrea last Sunday (13/11/16) in the Connacht J1B league. Castlebar were coming into this game hoping to bounce back from a disappointing defeat to Tuam last Sunday, while Loughrea were hoping to pick up their first win of the season.

Played on a treacherous pitch, the conditions didn’t stop the away side from showing off their impressive hands and their explosive backline. This was clear in the first play of the game, as Castlebar got on the scoresheet. Following a strong scrum, which gave a perfect platform for Castlebar’s backline, centre Luke Staunton received the ball and flew passed the defenders to race in for the opening try of the day. The try went unconverted to make it 5-0 to the away side inside the first five minutes.

Castlebar all but dominated the opening 15 minutes of the game. The away side finally added to their tally on the 20 minute mark. After constant pressure at the break down, winger Ronan Conway was able to pick the ball up and drive it over the line to give the away side some much needed breathing space. Stephen Rogan narrowly missed on this occasion to make it 10-0.

Loughrea were desperate to grab a score before the break. They constantly pressurised the away side’s line. The home side finally got the score they needed on the stroke of half time. Following some dominant forward play, second row Eoin Morrissey was able to gather the ball and bundle over the try line. Michael Martin converted impressively, to reduce the deficit to three at half time at a score of 10-7.

Castlebar came out the stronger of the two teams after the break, this was evident as they were able to add 3 points to their tally immediately, thanks to a penalty from Rogan. The next 10 minutes of the game brought a try for either side. Loughrea’s Eoin Morrissey went over for his second try, while Castlebar responded through David Staunton, who scored after some impressive build up play. Both scores where converted to give the away side a lead of 20-14.

The last 20 minutes of the game where tightly contested. But Castlebar were finally able to pull away from the home side and score a well worked try to give them the bonus point, thanks to Phillip Staunton, who went over in the corner after some very impressive back play. The try went unconverted to make it 25-14.

The away side showed their class in the last 10 minutes, as they grabbed two quick fire tries. An impressive individual try from Martin Moran and a well worked try, that was finished off by Sean Tonra, sealed the faith of the hosts who suffered yet another defeat. Castlebar were able to close off the last few minutes comfortably to win the game 37-14

Castlebar will now travel to Ballyhaunis next Friday night, were they will be hoping to carry on their fine form and pick up another victory.