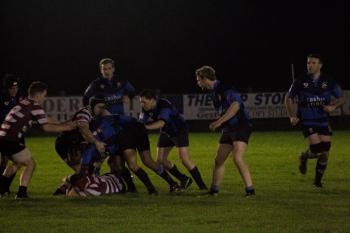 Castlebar travelled to Ballyhaunis last Friday night in the Connacht J1B league. Castlebar were coming off a good win, as they beat Loughrea convincingly last Sunday, while Ballyhaunis were looking for their first win of the season.

Played in very wet conditions, it was clear that both teams would struggle in the handling department. This was very clear in the opening exchanges of the game, as neither team could get any momentum going. The home side started the stronger of the two sides, as they piled the pressure on Castlebar, the away side were able to prevail and set up their own attacks.

It was clear that Castlebar had more strength out wide, this was evident as they were able to grab two quick tries in five minutes. Luke Staunton grabbed the first after he broke through the heart of the Ballyhaunis defence, while David Staunton got the second after some slick hands from the backline put him over in the corner. Stephen Rogan converted one from the two to make it 12-0

The rest of the half was very back and forth, as both teams were trying to grab a score before the break. The away side were able to add to their tally in the last play of the half. Following some strong back play, outhalf Paul Coady was able to get past the first defender and offload to Rogan who went over for the try. Rogan converted his own try to make it 19-0 at the break.

Castlebar came out for the second half the same way they finished the first, as they piled the pressure on Ballyhaunis immediately. The pressure finally tolled and Castlebar were able to add to their tally, thanks to Paul Coady who grabbed the bonus point for his side, after he broke through the defence to go under the posts. Ronan Conway converted on this occasion to make it 26-0.

The hosts weren’t able to get any foothold in the game, as they were completely overwhelmed by Castlebar’s expansive game. This was clear as Castlebar added two more tries to their tally. Coady went over for his second after some impressive play, while youngster Tommie Keane grabbed the next score, following some strong running from the flanker; he was able to burst through the defence for the try. Conway converted on both occasions to make it 40-0.

Ballyhaunis were desperate to grab a consolation score before the end of the game, as they kept banging on the door of the away sides defence. They were finally able to grab the score thanks to fullback Ross Nolan, who found a gap in the Castlebar defensive line and was able to bundle over the line for the try. Nolan converted his own try to make it 40-7.

Castlebar will now welcome Corinthians on the 4th of December which is sure to be a heated battle.