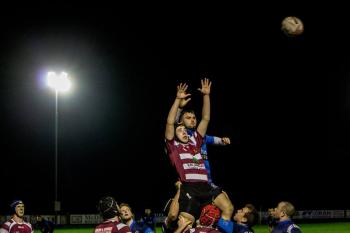 Castlebarwelcomed Ballyhaunis in the third round of the J1B league lastSaturday night in Cloondesh. The home side were coming off animpressive win from their previous game overcoming Ballinrobe lastFriday night. While Ballyhaunis were still searching  for their firstwin of the season.

Playedin perfect conditions for a running game, Castlebar were able torelease their backline throughout the game. The home side  startedthe game with intent, as they grabbed two quick tries in the first 10minutes. Following some strong play through their backs, centre RonanConway was able to break the line and release fullback Stephen Roganto put him under the posts for the try. Rogan converted to make it7-0. In the next play Castlebar set a maul off their line out andwere able to drive  over the line with Gavin Sullivan to touch down.Rogan added the extras again to make it 14-0.

Ballyhaunisthen began to pack the pressure on Castlebar, with some strong playfrom their pack. The home side were able to prevail from the constantpressure and launch their own attacks. Castlebar were able to grab 3quick fire tries before half time through Conor Tuohy, Damien Togherand Stephen Rogan who grabbed his second of the day. Castlebar wentinto the break leading 33-0

Castlebarstarted the second half the same way they finished the first, with aquick try from David Staunton, after receiving a perfect ball fromPaul Coady Staunton was able to stroll under the posts to make it40-0.

Castlebardominated the forward exchanges throughout the game, this was evidentthrough 3 quick tries they grabbed from their domination at thebreakdown. Marty Moran, Conor Tuohy and debutant Sean Tonra allscored from this domination to make it 61-0.

Thelast few minutes were tightly contested, as Ballyhaunis were hopingto get onto the score sheet. They piled the pressure onto the homeside, but the well drilled defence of Castlebar were able to keepthem at bay. There’s no doubt Seamus King was very happy with hissides defence.

Inthe last play of the game Castlebar got over the line again, asyoungster Paul Walsh raced over the line to close off the game andopen up his account for the side. The try went unconverted to make it66-0.

Castlebarwill be very happy following their recent run of form and, will hopeto bring it into their next game against Sligo on the 23rdof October in Sligo which will be a tightly contested encounter.