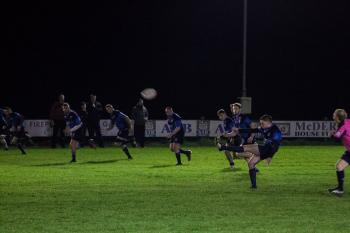 Full result from Saturday with match report by Eoin Togher:

Castlebar welcomed Tuam in the J1B league last Saturday night in Cloondesh. Both teams were coming into this game on the back of impressive wins, as Castlebar earned a hard fought win against Creggs last week, while Tuam continued their unbeaten run with a victory over Corinthians last Sunday.

Played in very wet conditions it was clear it was a game for the forwards. The home side started off the stronger of the two teams, as they grabbed a try in the first five minutes of the game. Following, a strong scrum Castlebar were able to put Tuam under pressure, after some powerful play from their pack, Ian McDonagh was able to pick the ball up and bundle over the line for the try. Stephen Rogan narrowly missed the conversion to make it 5-0

The next 10 minutes where tightly contested, as both teams exchanged penalties. Tuam’s Jamie Murphy slotted a penalty from long distance, while Rogan responded to extend the home side’s lead to 8-3. The away side were cutting through Castlebar’s defence throughout the game. Pressure finally turned into points for Tuam, as Murphy was able to burst through the middle of the defence and race over the line for the try. He converted his own try to give the away side a 10-8 lead going into the break.

Tuam started the second half with intent, as they got on the scoreboard immediately. Following, a kick through the middle flanker Eoin Mchugh was able to gather the ball and score the try in the corner to give them a 15-8 lead. Murphy was unsuccessful with the kick on this occasion.

Castlebar were desperate to get a score to try and orchestrate a comeback unfortunately, they couldn’t gather any momentum to challenge the away side’s defensive line. Tuam were able to prevail from the pressure and score two quick tries against the run of play. After a smart kick through by outhalf Eoin Cosgrove, flying winger Conor Marsden was able to gather the ball and race over the line. They weren’t finished yet, as they scored in the very next play, after some impressive back play, centre Owen Helion was able to burst through the middle and go under the posts for the try. Murphy converted on both occasions to make it 29-8.

Castlebar were seeking a consolation score in the last play of the game and they owe a big thanks to youngster Tommie Keane who did just that. The young forward was able to break several tackles to score the try of the day. The try went unconverted to end the game 29-13 in favour of Tuam.

Castlebar will now travel to Loughrea next Sunday were they will be hoping to bounce back and get their momentum running again.