About Us - Club History

Not many people know that Castlebar RFC was represented at the founding meeting of the Connacht Branch. The Connacht Branch was founded in 1885. The following clubs were represented at that meeting - Ballinasloe, Castlebar, Galway Town, Galway Grammar School, Queen College Galway and Ranelagh School Athlone. Only Castlebar, Ballinasloe, and Queens College (now NUIG) still survive. 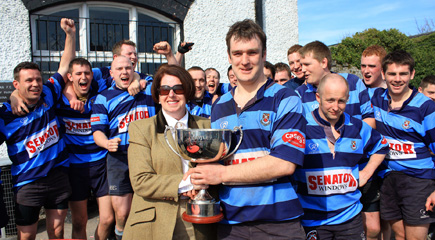 The Rugby Club was founded by a number of keen local people who got together with some of the soldiers stationed in the barracks to field a team. The original strip was black and amber and the club was active for a few seasons. Even in those days the club was represented at Inter-Provincial level with Paddy Flannery playing for Connacht & Gussie Wynne just failing to get Inter-Provincial honours.

In 1939, the club was revived by Michael Heverin and some friends.  At this time the club colours were changed to the present sky blue and navy blue (primarily because Michael presented the club with a set of jerseys in the colours of his old school, Castleknock College). The club played wherever they could get a field but ones that got regular use

were Niland’s (where the Industrial Estate is now) and Flannery's (where the old swimming pool was).

The club was active throughout the 40’s and 50’s but interest faded in the 60’s.

In 1970, the club did another phoenix when over 40 people attended a meeting in the Imperial Hotel in Castlebar. Among those who attended were Ralston, Dr. A. Taaffe, A. Bourke, Charlie Garavan, Fergus Kilkelly, Padraig Lyons, Frankie Cresham, Lar Davis, F. Davey, David Flood, Michael Heverin, Ollie Whyte and Dr Declan Shields.

The first game was played in Durcan’s field in Turlough. The club colours were still sky blue and navy blue as before. They used the St. Mary’s field for training sessions, but things improved when the Western Health Board allowed the club to use the Airport Field.

The early games were played in the Airport Field, once the cattle were driven off it (not particularly remembered as a great playing surface), and changing rooms were kindly supplied by the late Tony McHugh of the Welcome Inn. Various premises have been used as HQ for the club down through the years. It started in the Imperial Hotel, and later moved to Niall Keyes pub (now The Bungalow Bar).

The club won their first trophy, the Junior B League in 1972 captained by Johnny McCormack.

In 1974, the club took a big step forward and purchased 8 acres of land in Cloondeash. The main pitch was developed, and every training session ended with a sweep along the new pitch picking stones. In 1984, the clubhouse was built, and thus started a famous night spot in Mayo. The discos ran every Friday night, and people came from all over Mayo for the enjoyable night out.

History of the Castlebar Ladies team

What started out as somewhat of an experiment two short years ago has seen the game of rugby firmly established for ladies in Castlebar and indeed Co. Mayo. The team was set up in September 2012 and they headed into the unknown. Little did they think it would take them just 15 months to win the Connacht League but that’s exactly what happened when team captain Caroline Staunton lifted the cup in November last year. The panel on that historic day was made up of 29 girls and interestingly only 2 of the 29 had played rugby before the team was set up. Startling as that may be, it only highlights the fact that this team is still in the developing stages and are welcoming new members every week. As with any sport or competition 2-in-a-row is hard to achieve but the momentum has continued this year and the ladies are firmly in the running for doing just that. The girls are trained by former Castlebar Rugby players Ger Prendergast, Christy Cusack and Jason Keane. Unfortunately, the senior ladies have now disbanded, but a juvenile section has restarted under the care of Mairead Bradley.

The 1990’s were pretty quiet for the club, the only highlight of the decade coming in the 95/96 season when Castlebar reached the Connacht Junior Cup Final, they unfortunately lost in the final to Monivea but the squad, under the head coach Rory Casey and captain Michael Hastings (R.I.P), showed what talent they had.

We would have to wait over 10 years for our next cup success when in the 08/09 season, under head coach Rory Casey and captained by Ruairi Hughes, Castlebar won the Cawley cup in an exciting match against Ballina.

They wouldn’t have to wait as long for the next cup victory when the following season, under new head coach Johnny McCormack and still captain Ruairi Hughes, they sealed back to back Cawley cup wins where they beat Sligo 26-18.

Castlebar have various methods of fundraising for the club and are always looking for new and unique ways of raising funds. The club run an annual lotto, Golf classic with the local Golf club and hold annual Race nights in the town sponsored by Tolster's Bar, Castlebar every 2 weeks.